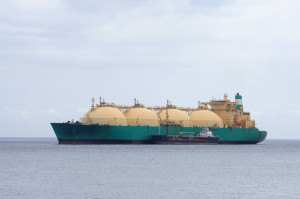 LNG is transported in double-hulled ships specifically designed to handle the low temperature of LNG. These carriers are insulated to limit the amount of LNG that boils off or evaporates. This boils off gas is sometimes used to supplement fuel for the carriers. LNG carriers are up to 1000 feet long, and require a minimum water depth of 40 feet when fully loaded. As of 2012, there were 360 ships transporting more than 220 million metric tons of LNG every year.